What Makes a Car a Collectible? 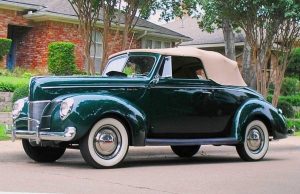 Collectible cars fall in different categories and occupy a large area of interest that spans from the earliest antiques to the not-so-old muscle cars of the ’60s and ’70s. Beauty is in the eye of the beholder, but there are some general definitions as to what makes a car collectible.

The Classic Car Club of America defines a classic as a vehicle made from 1925 to 1948 that runs and has been completely restored. Some states have different criteria for this category, qualifying cars that are 15 to 25 years old. Vehicles under 25 years old are sometimes referred to as modern classics.

Age plays more of an important consideration when defining an antique car. However, it depends upon the source of the definition. For example, Greatoldcars.com defines the age span to run between 1886 to 1915 while Antiquecar.com states that any vehicle manufactured prior to 1950 qualifies for the antique era. The more general consensus is 25 years or older, according to the Antique Car Club of America.

Muscle cars, so named because of their horsepower and performance characteristics, evolved from the ’60s and lasted into the early ’70s. These cars are sought after for their large engines and high-performance transmissions, manufactured at a time when oil consumption was not an issue. They are a favorite of the baby boomer generation.

Cars that are hard to find or nearly non-existent are some of the most sought-after collectibles on the market. If the designer is well-known, like Carroll Shelby or Chip Foose, the demand can be staggering. Cars can be rare because of very low production runs or their experimental prototype status, such as the Bugatti Royale and the 1931 Bugatti Royale Kellner Coupe.

Regardless of condition, old or extreme age can up the value of any vehicle. True antique cars also have more history and cultural significance. Very old cars can be rare and difficult to find since they have carried collectible status much longer than other newer vehicles and may have passed through several ownerships and become part of private collections.

Just the look of a car can garner extreme collector interest. In the past, this involved attention to detail and design changes that started trends. Post World War II vehicles like the Kaiser-Frazer and the 1946 Crosley incorporated solid designs in body styling, changing the replaceable fender and producing one-piece body units. The space age during the early ’50s and into the ’60s brought about sleek bodies and rocket-like fins. Such cars included the 1959 Cadillac Eldorado, 1957 Plymouth Belvedere and the 1957 Chevrolet Bel Air.