Was the Corvair as Bad as Ralph Nader Claimed? 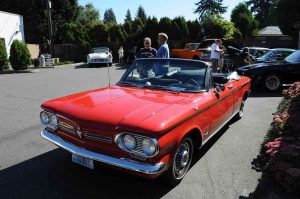 In his book “Unsafe at Any Speed”, the famous and often outspoken political activist Ralph Nader claimed that the Chevrolet Corvair was the most dangerous automobile on the road in the 1960s. While Ralph Nader certainly made some valid points in his most popular book, the Corvair may not have been as bad as he claimed.

In the first chapter of “Unsafe at Any Speed”, Nader fired a barrage of criticisms at the American automobile industry by stating that the Corvair was a “one-car accident”. While Nader viewed most automobiles to be dangerous, he targeted the Chevrolet Corvair due to its unconventional design. Unlike many other vehicles, the Corvair utilized a swing-axle suspension system. This specific system on the Corvair caused tire pressure requirements that were not in line with existing industry standards. These unregulated requirements were often not filled by the owners of Corvairs. While this was a major problem of the original Corvair, a larger problem developed from the vehicle’s inability to bear heavy loads without handling issues developing. Over-steering issues were also caused by the absence of an anti-sway bar in the Corvair. While these are real issues, it is important to note that many drivers of Corvairs did not experience any problems with handling.

Nader may have had a point when he discussed the Corvair’s issues, but he clearly had an agenda that was a disservice to car enthusiasts. Nader seemed to miss the point that the rear engine may have also been a contributing factor that lead to many accidents. The rear engine placement in the Corvair caused a weight imbalance that resulted in poor handling. As a performance vehicle, many people enjoyed driving the Corvair at high speeds. When combined with poor handling, high speeds can lead to an accident when the driver attempts to correct a steering error. Another issue with the Corvair occurred after the initial accident. Due to the weak hinges that connected the hood to the frame of the car, the hood often became a dangerous projectile that caused many fatalities.

Not All Corvairs Are Dangerous

These design errors only apply to original unaltered Corvairs from 1962. After the problems of the Corvairs were realized by third-party manufacturers and mechanics, aftermarket parts that made the vehicle safer became rather common. One of the most common solutions employed by mechanics involved attaching brackets to the chassis of the Corvair. This reduced the pressure placed on the front of the vehicle and handling improved. By 1964, these aftermarket repairs were no longer necessary; Chevrolet implemented safer designs for all new Corvairs.