The History Of The Station Wagon 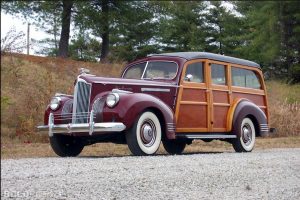 The term “station wagon” is used to describe the body style of a car that has a longer roof line, multiple rows of passenger seating and a cargo liftgate in the back. Over the years, this type of vehicle has evolved, and it continues to influence the automotive industry. The history of the station wagon is quite interesting and displays the way that society dictates what cars are manufactured.

In the beginning, a station wagon was known as a “depot hack” because it was used to carry passengers and cargo after they got off of trains. The early design was based on a truck platform that did not contain doors. In 1922, the first enclosed station wagon was introduced. Ford began using a wood-based design was extremely popular at this time. Following WWII, technology advanced, and steel replaced wood as the major material used to manufacture this type of vehicle. The first factory-built steel wagon belonged to Jeep.

The modern design of a station wagon reached its peak in the 1960s. This decade saw the development of compact, mid-size and full-size wagons. A person could choose between a two-way, three-way, side-by-side or liftback option. Buick and Oldsmobile got creative and invented a raised roof that had glass panels and a glass sunroof.

After the gasoline crisis of the 1970s, the station wagon began to lose popularity. The minivan design was becoming more practical and muscle cars took center stage. As the 1980s approached, front-wheel drive cars became popular, and the new millennium ushered in a time when Sports Utility Vehicles were all the rage. At this point in America, station wagon production was nearly obsolete. European luxury automakers continued to offer some wagons in their lineups, and they are still available today. These vehicles remain popular overseas.

Although the future of the station wagon is uncertain, its body style may return one day. This type of vehicle offers more cargo room than a crossover and does not compromise handling. As people want a vehicle that can haul numerous passengers and cargo, the wagon may see a resurgence under a special niche.