The Cammer – Ford’s Answer to the Hemi 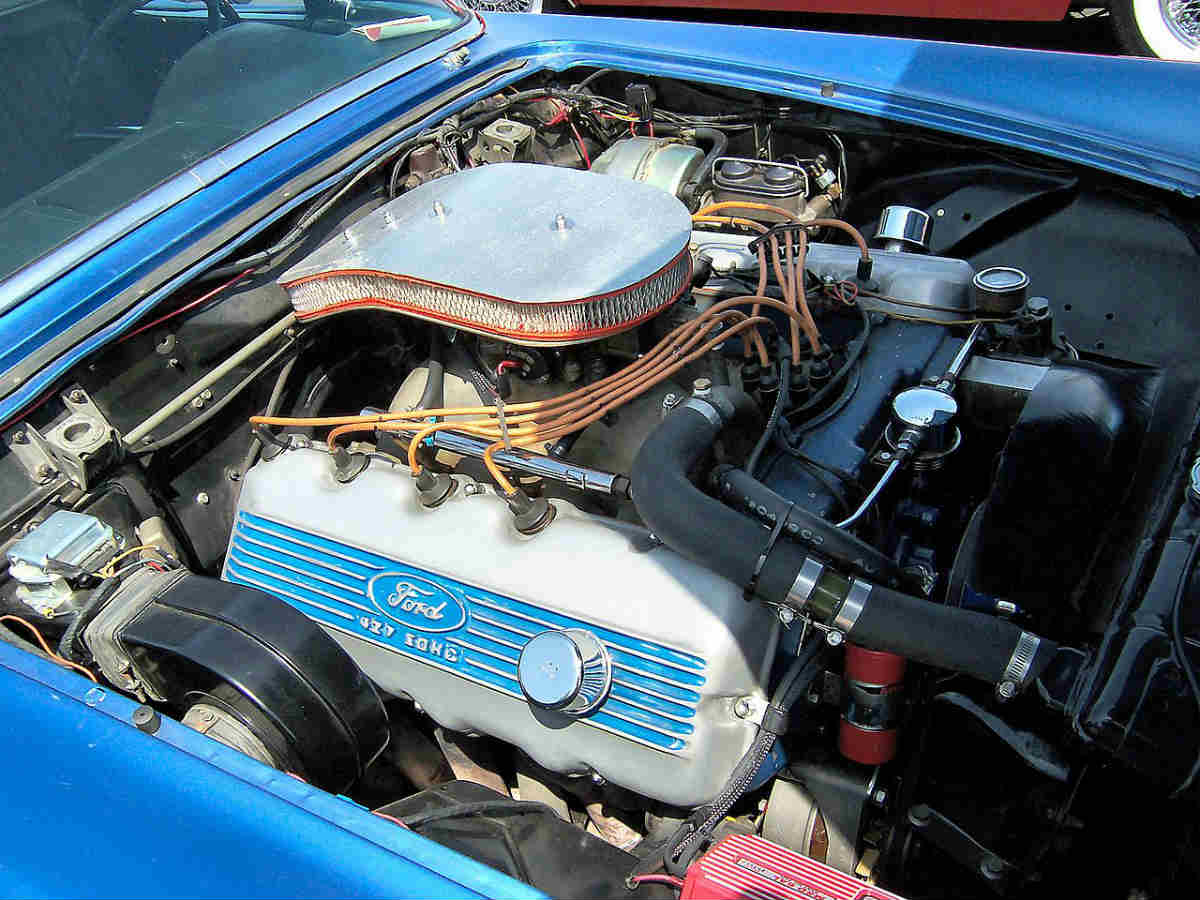 In the heyday of the muscle car, very few of the racing engines coming out of the Motor City rivaled Ford’s 427 CID SOHC V8 engine, otherwise known as the “Cammer.” When equipped with dual four-barrel carburetors, the legendary powerhouse generated a prodigious 657 horsepower. Even when a single four-barrel carburetor was employed, the engine could still generate 616 horsepower. Therefore, it should come as no surprise that this big, powerful engine often appears on lists of the top ten engines of all time.

The development of the Cammer was inspired by Richard Petty’s stunning upset in the 1964 Daytona 500 in a Plymouth powered by Chrysler’s 426 Hemi. The sudden emergence of the Hemi engine shook things up in the Ford racing community. Ford’s 427 Hi-riser engine had once reigned supreme, winning race after race before the Petty upset.

Concept to Reality in Just 3 Months

Ford was quick to respond to the new threat posed by Chrysler’s powerful Hemi power plant. Ford’s modification of the Hi-riser engine proceeded from the drawing board to reality in less than three months.

Ford then went to NASCAR seeking approval for its new single overhead cam design. According to a February 23, 1964, article in the Daytona Beach Morning Journal, NASCAR head Bill France nixed the idea. Some speculated that he saw overhead cam engines as better suited to European racecourses. Clearly, he did not want them America’s Grand National stock car circuit.

The engine had quickly generated its share of controversy. In fact, NASCAR’s pre-emptive strike was decisive. The organization banned the engine before it ever appeared in a NASCAR event.

For a time, Ford did not give up hope that the Cammer would eventually find its way out on the circuit. The Detroit automaker would go on to display a 1964 Ford Galaxie before the 1964 Indy 500, hoping for positive reviews from the press. Ultimately, Ford hoped that positive publicity would lead to an eventual NASCAR reversal, but this never happened. Instead, in October of that year, NASCAR moved to eliminate both the Ford 427 SOHC Cammer and the Chrysler 426 Hemi from the Grand National circuit, derisively referring to both as “special racing engines.”

Chrysler officials viewed the decision with contempt, and the automaker actually pulled out of NASCAR competition in protest. Ford, however, continued to compete with its traditional pushrod engines.

Meanwhile, the Ford engine was the subject of a detailed review in the January 1965 issue of Hot Rod magazine. It also graced the cover of that particular issue. Much of the material for the article derived from a paper, SAE 650497, presented by the lead engineers working on the 427 SOHC project.

Still, in December 1965, NASCAR renewed its ban of the Cammer for the 1966 season. The USAC staked out a similar position. Then, in April 1966, NASCAR appeared to reverse itself, as it allowed the use of the single-carb Cammer in full-size Galaxies. However, with a weight handicap of 4400 pounds, the setup was not competitive with Chrysler Hemis that came in at over 400 pounds less. The Ford Motor Company rejected this NASCAR offer, and it set its sights on promoting the Cammer for drag racing. The Cammer still appears in vintage drag racing events even today.

Ford’s overhead cam design had invaded the world of the pushrod V8s. Chrysler cried foul and won. The Cammer never appeared in regular-production Fords either. Although the powerful V8 was never featured in a showroom model, Ford did use the innovative power plant in some of its 1964-67 Galaxie prototypes. The Cammer was also an important predecessor to the Ford production SOHC and DOHC engines that followed in the years that followed. 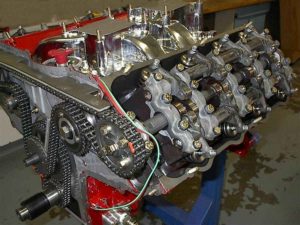 Although the 427 SOHC engine eventually became the stuff of legend, it represented a quick and reasonably simple modification of the FE engine. Ford only invested modest sums in the project while the real money went into development of an Indy power plant, a pricey DOHC design based on Ford’s small-block V8.

The Cammer represented an evolution of the Hi-riser short block engine. It featured hemi-head pistons and a forged steel crankshaft. The machined cylinder heads were redesigned, and a single overhead camshaft was positioned above each of them. With the camshafts positioned above the cylinder heads, the pushrods are eliminated. The design allows for straighter and larger intake ports. Inside the engine, the camshaft was replaced by an idler shaft that operated the oil pump and the distributor. Oil passages were sealed off by steel bushings.

The new creation originally featured a lengthy timing chain almost 7 feet long. Racing teams had to adjust the cam timing from four to eight degrees to successfully cope with the inevitable slack in such a long chain drive. The chain also required the use of cams that essentially mirrored each other. Eventually, the timing chain was replaced by a gear drive system. With the addition of an extra gear on the left bank, right-hand camshafts could now be used with both banks.

The Cammer in Drag Racing 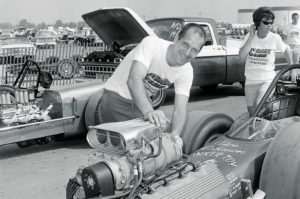 The Cammer would be a successful drag racing solution only if a number of sticky problems could be resolved. For example, the gear drive system that replaced the timing chain was the result of a collaborative effort by Pete Robinson, Harvey Crane and P&S Machine.

Eventually, the Cammer achieved real success as a drag racing engine, and derivations powered a number of Top Fuel Dragsters of the day. For example, Ed Pink and driver Tom McEwen used a Cammer in an AA/Fuel Dragster at the U.S. Nationals in 1967. Ford also worked out Cammer deals with nitro racers like Connie Kallita and Pete Robinson. Don Nicholson used the Cammer in 1966-67 in flip-top Comet funny cars.

Given the fact that Cammers are really scarce and expensive nowadays, it is difficult to imagine that they were OE surplus 45 years ago. Back then, a new Cammer crate engine sold for about $2,300.

The 427 SOHC engine may have been part of the FE engine lineup, but it differed in that it was essentially a hand-built racing engine. In terms of NASCAR-sanctioned events, it would forever remain a racing engine in search of a race. Should the Cammer ever become the subject of a friendly debate, take bets on whether it ever appeared in a NASCAR race. Just make sure to bet that it never did, because that’s a fact.