As the year starts to draw to a close and both the leaves and temperature begin to fall, it’s time to think about taking the extra steps in taking care of your vehicles, especially those of us with diesel engines.

Aside from making sure the glow plugs are warmed up before starting our motors, another big concern amongst diesel owners is a process called gelling. The gelling phenomenon happens when the paraffin in diesel solidifies due to drops in temperature. There are two key temperature points that you need to be aware of in regard to the gelling process. The first is titled the “cloud point” which is the temperature where paraffin wax finally begins to precipitate in the fuel making the fuel cloudy, hence the name. This point usually happens when temperatures hit around 32 degrees.

The next point is called the pour point or gel point. At this stage, so much wax has already precipitated in the fuel that it no longer flows which happens around 15 degrees below cloud point or 17 degrees Fahrenheit. Luckily there are additives out on the market that control the gelling processes, some even contain boosters that helps gain power and mpg while running it through your tank. By far, my personal favorite that I have used is the STA-BIL DieselPower Anti-Gel. 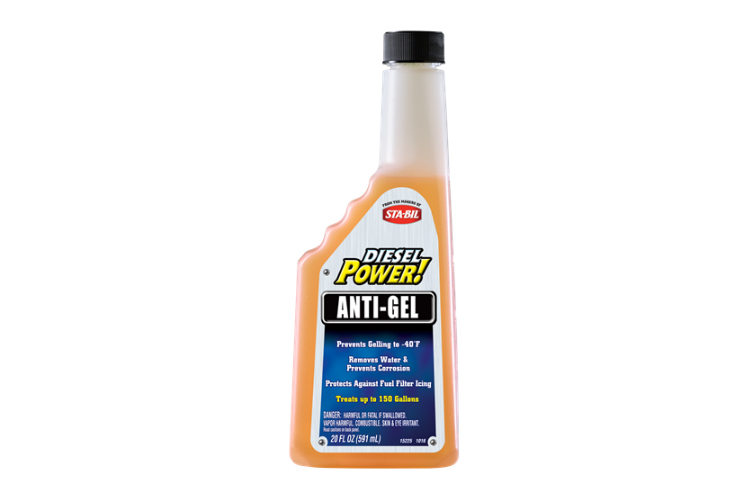 Being around for over 60 years now, STA-BIL knows their way around fuel additives and engine treatments. Their Anti-Gel formula prevents gelling to -40 F, eliminating any worry of the cloud and gel points that would otherwise plague those living in states that have a winter season. Along with the benefits of the product in the fuel tank, STA-BIL’s DieselPower Anti-Gel also contains added features while running through the engine as well. STA-BIL’s offering has the additional feature to clean and lubricate fuel injectors and pumps which promotes longevity for those trying to get every mile out of their workhorse motors.

My personal test vehicle is a 2017 GMC Canyon with a bone stock 2.8l I4 Duramax Diesel engine. After running a few tanks through with the STA-BIL DieselPower Anti-Gel I am happy to also say that I was able to see noticeable power and mpg gains which I believe I wouldn’t otherwise see, especially in the winter months when engines are running very inefficient. Although STA-BIL doesn’t advertise this product to have these benefits, I was seeing a bump of close to 2 mpg driving the same amount of highway and city mix. And although I don’t have a dyno lying around, there definitely was an improvement when I went for the pedal in an otherwise pretty gutless vehicle.

Overall, when the cold weather comes back, I know that the STA-BIL DieselPower Anti-Gel will be going into my tank during every fill-up, and I recommend it goes into yours too.