Small trucks with huge followings: The Chevy S10 and the Ford Ranger

We’ve taken a look at many rivalries in the past on this blog that have divided fans for ages, and more often than not, the most divisive one has been Chevy vs. Ford. Usually look at the hot rods and street machines made by these two brands, which have gone to great lengths to one-up each other while trying to take the title of best economy marque on the market. However, a lot of drivers who own their own all-American muscle cars also tow their rides with a beefy truck.

Each company has produced solid four-wheel drive pickups that have dominated the market. After all, the F-150 was the bestselling vehicle on the road for much of the past half century – not just when it came to trucks but in terms of all vehicles sold in the United States. As well, the Chevrolet Silverado has been awarded “Truck of the Year” honors almost a dozen times over the past two decades alone from Motor Trend, Car & Driver and other respected magazines.

However, these two companies have not only produced the two best heavy-duty, full-size trucks ever made, but they have also been able to build smaller pickups that have built up massive fan bases of their own over the past 30 years.

The Ford Ranger and the Chevrolet S10 are two trucks that have dominated the compact market since the 1980s. These two vehicles were certainly introduced in response to one another, like many of the other models that each of these brands have introduced over the years. As well, each one of these models has traded off spots as the sales leader in the compact truck segment continuously over the past 20-plus years.

The Chevy S10 came first in 1982 as the pickup version of the popular S10 Blazer sport-utility vehicle (itself a model designed to take a chunk out of the Ford Bronco – a far superior and larger model). Originally, GM had been rebadging Isuzus and selling them as Chevys as their entry into the compact truck market, but they decided it was time to finally develop a small truck of their own. This move worked out for them in the long run when European and Asian carmakers started taking a chunk out of GM’s share of the automobile market during the ’80s and ’90s. Soon, models like the S10, Blazer and Silverado would be the bestselling vehicles in the lineup while car sales plummeted.

In later years, Chevy and Ford would eventually help foreign partners by rebadging the S10 and Ranger so that these smaller companies could have a stake in the market – for Chevy, it was Isuzu, while Ford reskinned the Ranger for Mazda. Foreign companies have still yet to master the design of a successful pickup – whether it was full-sized or compact.

The Ranger followed the S10 a year later, although Ford had been working on a design for a compact truck like the ranger back in 1976. Their aim was to create a truck that was fuel efficient in response to the oil crisis that made gas prices skyrocket in the late 1970s but still perfectly capable. The result was a truck that shared much of its styling with the larger F-150 that would go on to be a sales hit for the brand.
While the S10 disappeared in 2004, it was replaced with the still successful Colorado in 2004. The last Ranger, however, was built in December 2011 and was sold to pest-control company Orkin.

Which model do you prefer? 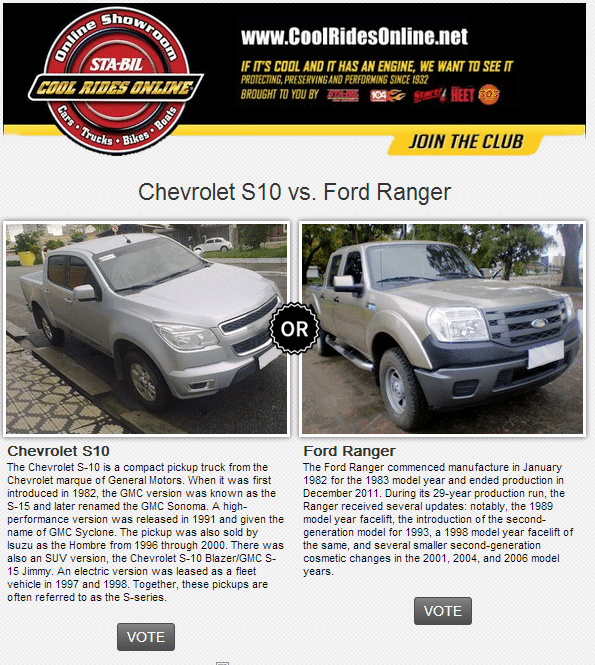