Signs of Winter Fuel Trouble: Five Things to be Aware of with Diesel Tanks 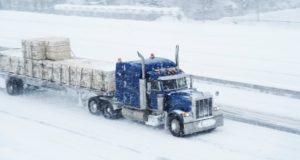 The cold weather that has plagued much of the Midwest and East Coast recently can have devastating side effects on vehicles running on diesel fuel. Having a general understanding of some key cold-weather do’s and don’ts can drastically reduce the chances of equipment trouble or even breakdowns during the frigid winter months.

Before It Gets To You

When the cold winter months are approaching, fuel manufacturers are already preparing for winter. Fuel manufactures custom blend fuel according to the region where it will be distributed and the weather projections for that region.

The major difference in fuels sent to the northern or southern states is the ‘cloud point.’  Diesel fuel naturally contains paraffin wax and the cloud point is the temperature at which the paraffin wax begins to form wax crystals.  When the paraffin wax begins to crystallize, it starts to restrict the fuel flow by plugging the fuel filters and even the fuel lines, especially those exposed to the elements such as a fuel crossover line that runs between two fuel tanks. This can lead to some crippling side effects.

What can you do to prevent the fuel in your tank from gelling up?

To Sum It Up

The key here is preparation. Follow the steps listed above and be ready for the cold weather. If you suspect fuel gelling, look in your tank for white/yellow deposits or cloudy fuel.  The truck will also start hard (if at all), smoke and have a loss of power.

Remember a truck not running means downtime and lost revenue.  Bundle up and keep hauling this winter!!