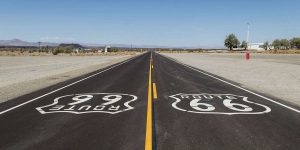 From © Dietmar Rabich via Wikimedia Commons

Since its establishment in 1926, Route 66 has not only had a huge impact on the way that Americans travel from place to place, but also the way that they define themselves as an essentially free and mobile people. There is perhaps no fitter metaphor for the “American way of life” than a long -running, well-kept highway that enables us to satisfy our wanderlust while guaranteeing us safe passage back to our family and loved ones after the urge has been satisfied. Join us as we continue the series of articles celebrating the 90th anniversary of Route 66.

It’s no secret that the unique image of Highway 66 has long permeated our American culture with an allure that perhaps no other landmark can match. Although largely vanished, the highway still remains as a tangible presence in our national consciousness. A comparison with other famous landmarks may be instructive to illustrate its continuing appeal. While the Brooklyn Bridge and Hoover Dam loom large in our collective cultural imagination as symbols of vast engineering ability, they don’t quite match up to Route 66 as beacons of immediate freedom.

Perhaps this is because they and other similar landmarks are definitely linked to a predetermined origin and eventual destination. In the classic days of Route 66, you could start at one end, or in the middle, and get on or off anywhere. The sheer variety of venue choices that Route 66 opened up to the American – and, by extension, international public – was a revelation that has since been absorbed by every facet of our popular culture.

The Presence of Route 66 in Music 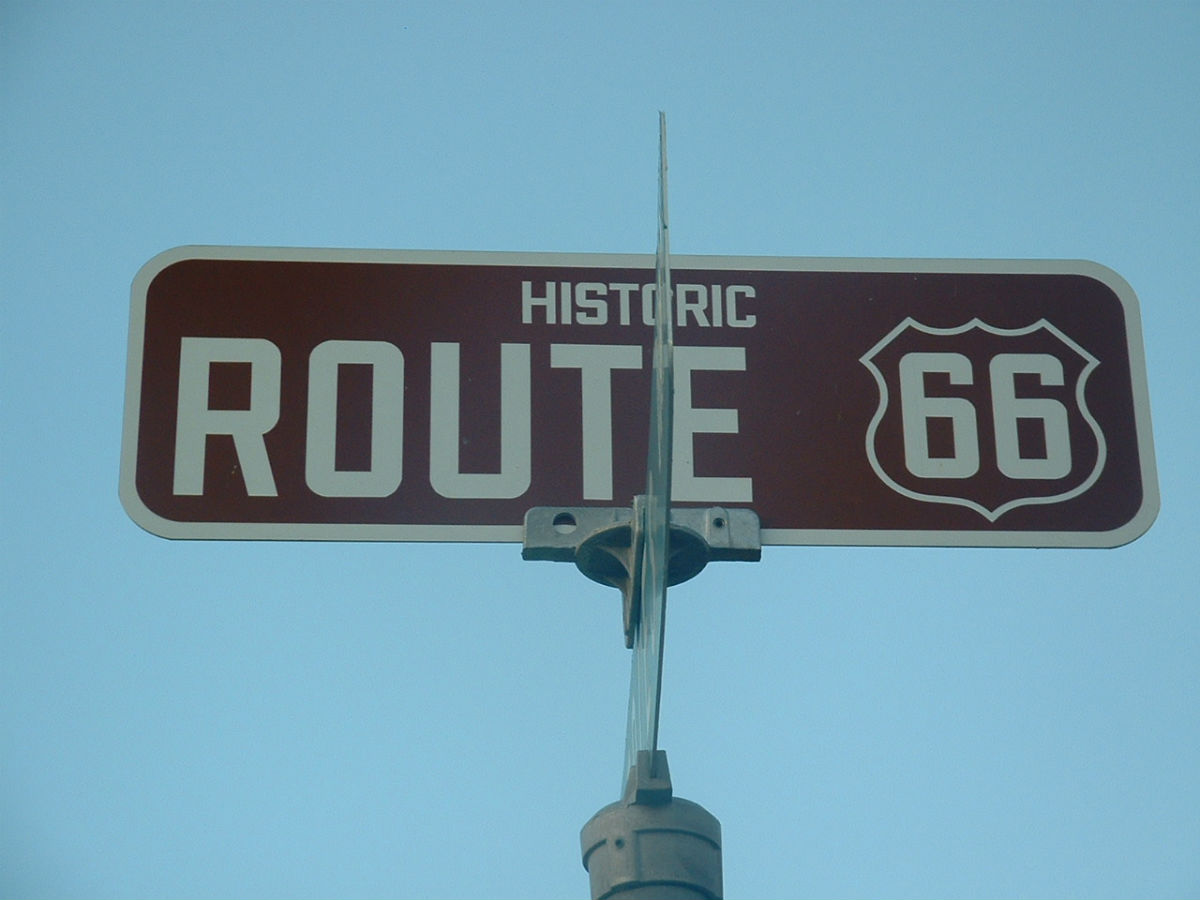 From Renjishino via Wikimedia Commons

Ever since Bobby Troup penned his immortal ode to America’s favorite highway, “Route 66” has become a perennial standard in the American popular songbook. Troup himself went on to compose many other enduring American pop culture standards, but “Route 66” still remains his signature composition. The lively tune has been covered many dozens, if not hundreds of times, by performers as diverse as Nat King Cole and the Rolling Stones.

Along the way, the song has also been covered by Bing Crosby, Perry Como, Chuck Berry, the Andrews Sisters, Them, Patti Page, and many more. The song has entered American pop culture mythology and proven to be a composition that has long outlasted its titular inspiration. The simple, direct lyrics of the tune, combined with an instantly catchy rhythm have proven irresistible to generations of pop music fans, making it one of the most enduring and recognizable classics to be found in the American musical repertoire.

The highway has also been featured in a less direct manner in such songs as Bruce Springsteen’s “Cadillac Ranch,” which features on his 1980 double album, “The River.” The song was reportedly inspired by the roadside attraction of the same name, which used to be found on Route 66 just outside of Amarillo, Texas.

The Presence of Route 66 in Movies and Television

Route 66 has also proven to be a constant and defining presence in American cinema. Bobby Troup’s “Route 66” has been used in dozens of movies, including recent examples like “RV” (starring Robin Williams) and the Disney animated feature “Cars.”

The highway itself has also been featured as a main or incidental element in many American movie classics. A notable example is the classic 1988 feature film, “Rain Man”, starring Dustin Hoffman in the titular role. Many scenes in the movie were shot at various locations alongside Route 66, principally in Oklahoma. The Super 8 Hotel in El Reno has since preserved their real life Room 117. This room was the venue for many of the film’s most celebrated scenes involving Hoffman and co-star Tom Cruise.

Because of the highway’s sheer size and nearly endless variety of scenery, natural and man-made alike, Route 66 has long been one of America’s most familiar and enduring settings and backgrounds. The highway has been explored as a metaphor for restless energy, or as a backdrop to a thousand tales of high adventure and sheer wanderlust. Movies that both celebrate and savagely criticize the basic ideals and propositions of the “American Dream” have featured Route 66 as an integral part, not only of their setting but also of their basic cultural premise.

Perhaps unsurprisingly, Route 66 has shown up in more than its share of television series. In fact, Route 66 was already a major player in in its own titular series by the early 1960’s. “Route 66”, starring Martin Milner and George Maharis, aired on prime time network television from 1960 to 1964. Though largely forgotten today, the show has, in recent years, been the subject of a positive critical reevaluation positing it as one of the era’s most artistically ambitious series.

The Presence of Route 66 in Literature

Perhaps the most famous example of literature involving Route 66 can be found in Jack Kerouac’s immortal classic, “On The Road”. It would be difficult to find a more characteristic evocation of the reckless, “Devil may care” atmosphere of the Beat generation of the 1950’s. Beyond that is a clear recognition of the sheer freedom that America’s highway system – and particularly Route 66 – offered to millions of eager travelers, “Beatnik,” “square,” or otherwise.

Route 66 has also played a part in countless other American novels, including John Steinbeck’s social protest masterpiece, “The Grapes of Wrath“. In this novel, Steinbeck famously gave to Route 66 the title of “The road of flight,” also dubbing it in another place “The Mother Road.”

While Steinbeck’s novel portrayed Route 66 in reverent, almost Biblical tones befitting the deep Protestant convictions of his Okie pilgrims, Kerouac’s perspective was far more modern and inherently secular. The contrast between the two styles of presentation is an excellent microcosm of the tensions and contradictions of American culture.

In Kerouac’s world, the highway serves as a source of endless pagan pleasures, with the featured characters dropping in and out of the narrative as they find (or fail to find) their hotly sought-after “kicks” at various locations found along the way. 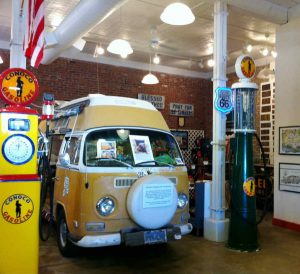 From Anna Harris via Wikimedia Commons

While much of Route 66 has disappeared following its decommission as a major American highway in 1985, there still remains plenty of evidence to be seen and cherished by historical and pop-cultural aficionados. Large chunks of Route 66-related memorabilia have been preserved at such venues as the Route 66 Association Hall of Fame and Museum, among many others.

Route 66 has long since passed into the realm of myth and history, but it continues to cast a long shadow over the present. Issues of race, religion, and culture still trouble our daily discourse and interactions, making the promise of Route 66 – a place where you could “get your kicks” – all the more nostalgic and attractive. While simple escape may not be the answer to all of our nation’s problems, there’s no denying that the possibility of such an alternative was an integral part of what made life bearable for millions – and may yet still define us as Americans.