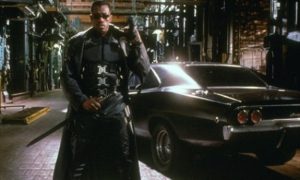 The Dodge Charger may be famous for its roles in “Bullitt” and “Dukes of Hazzard,” but it also had a leading role in one of the biggest comic book movie franchises: “Blade.”

Eric Brooks is a “daywalker,” a half-human, half-vampire hybrid created when his mother was bitten by a vampire during pregnancy. First introduced in 1973’s “Tomb of Dracula Vol. 1 #10,” he became a vampire hunter, starring in several comics and teaming up with fellow hunters. Over the years, he’s transformed from a hand-to-hand combat expert to a specialist with an array of James Bond-esque gadgets and weapons designed to take down the undead.

The first two movies put the Marvel Comics anti-hero, played by Wesley Snipes, in uncomfortable alliances with regular vampires who are seeking to take out the threat of reapers, members of their race that prey on other vampires. In “Blade: Trinity,” he has to stop a group of vampires from using the blood of Dracula to become daywalkers.

The Car of the Movies

Although Blade never had a car before reaching the silver screen, the design used in the movies borrows heavily from his comic book arsenal. His black 1968 Charger R/T appears stock on the outside, retaining the chrome trim and rally wheels of the original along with a hood scoop indicating a 440 Six Pack in the engine bay. Inside, a collection of toggle switches on the console activate the features, including vampire-melting UV lights and nitrous injection. A holster holds a shotgun loaded with Blade’s signature garlic-filled silver bullets.

The car plays a major part in the first and third films, but with most of “Blade II” shot in Eastern Europe, scenes with the Charger had to be cut back because mechanics familiar with American muscle cars and classic Mopar parts weren’t readily available.

The studio kept the car after “Trinity” wrapped in 2004. When plans for a fourth movie fell through, it was sold to a private owner in Vancouver who installed a 440. He put it up for sale on Craigslist in 2006 for $40,000. The current whereabouts of the car are unknown, but with interest in muscle cars skyrocketing and movies based on Marvel properties leading the box office, it could be worth several times that price.