The 1964 Pontiac GTO represents the quintessential muscle car. It’s not just its sexy Coke bottle-shaped body or its starring role in fueling the 1960s muscle car craze that made the “Goat” a rather unique and impressive machine. Approximately 8,200 or so of the GTOs ordered in 1964 also share a special treat that was just a check-box away. 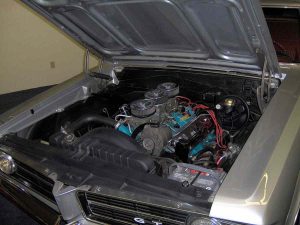 The burly 389 cubic-inch eight-cylinder engine, borrowed from Pontiac’s full-size offerings, put down an impressive 325 horsepower while flying in the face of GM’s then-recent prohibition on engines larger than 330 cubic inches in intermediate-sized vehicles. Nevertheless, Pontiac felt that this born rebel could use a few more ponies under the hood.

Enter the Tri-Power setup as an available option. Ticking the right order box meant dispensing with the single Carter AFB four-barrel carburetor in favor of three two-barrel Rochester 2G carburetors. This setup meant that the 1964 GTO could get extra helpings of fuel and air whenever demand dictated it.

In an era where fuel injection was still a relatively exotic option for a scant few vehicles, having a triple-carb setup proved very useful when it came to generating extra horsepower. The Tri-Powered GTO gained an additional 23 horsepower over its single-carbureted counterpart. Performance proved plenty brisk – contemporary reports put the Tri-Power GTO’s 0 to 60 mph time at a full second faster than a regular GTO, especially if properly equipped with an optional close-ratio four-speed manual transmission.

End of the Line for the GTO Tri-Power

The Tri-Power option remained available throughout the 1964 and 1965 model years, but changing technologies and a waning desire for many muscle car fans to take up the admittedly time-consuming task of synchronizing carb linkages conspired to make multiple-carburetor setups largely obsolete outside of serious racing and enthusiast applications. By mid-1966, the Tri-Power option went away in favor of the four-barrel single Rochester carb.

Even to this day, seeing a 389-powered Goat with a triple-carb setup is quite a sight to behold. While direct fuel injection and other hot-shot ways of metering fuel are par for the course, the Tri-Powered Pontiac GTO represented a time when drastic creative measures were met with some rather wild resorts.