Which Method Is Best for the Steel Body of a Car? 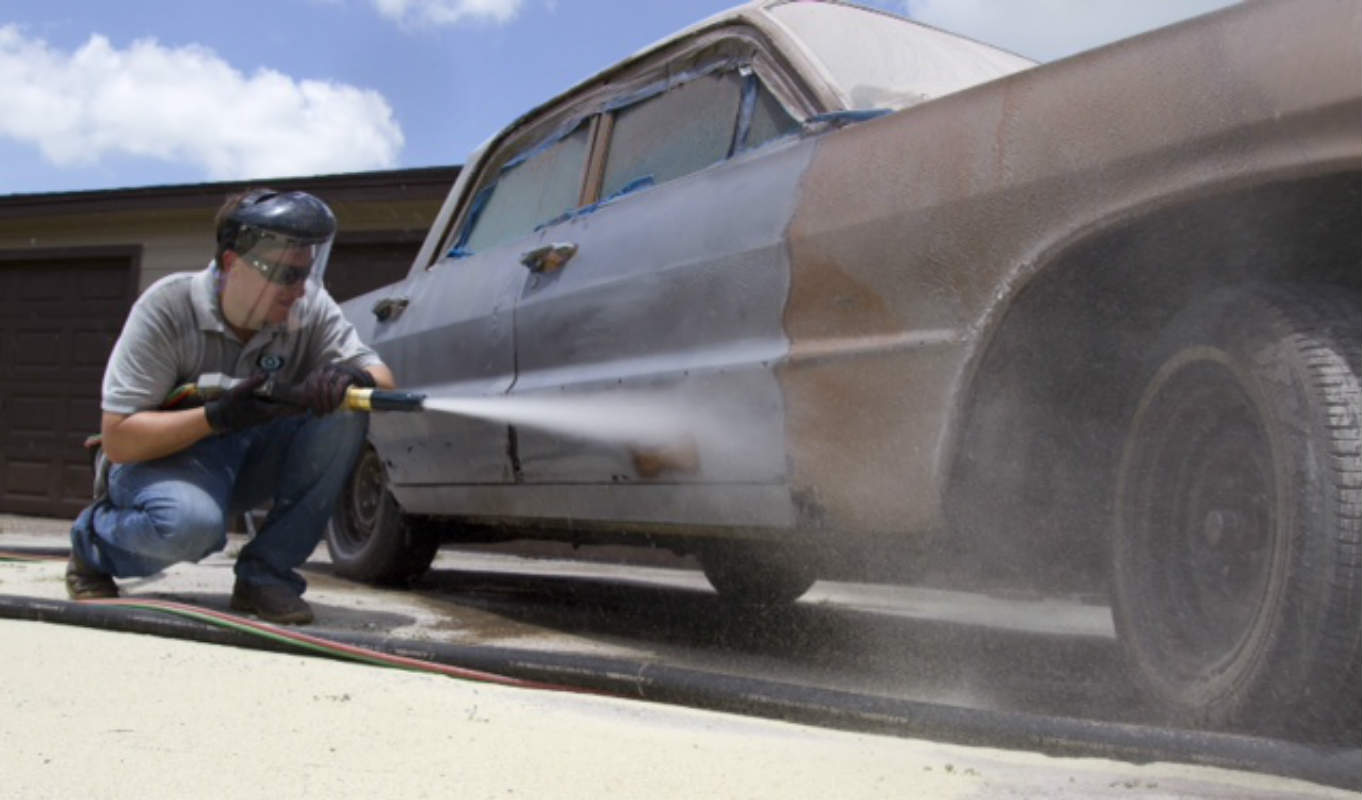 Out of the three methods, dustless sandblasting is better for steel because the water in it reduces friction and heat, which can warp the metal during the stripping process. According to Dustless Blasting, the original manufacturer of dustless sandblasting equipment, dustless sandblasting can actually lower the temperature of the metal by 10 degrees while the process is being performed. By contrast, normal sandblasting will produce heat and friction, and the metal can be subject to warping because of this, especially if it’s thin. Some people have taken to applying a cooler to the sand during this work to help mitigate this effect. Dustless Blasting also claims that while soda blasting won’t warp steel because it doesn’t create enough friction, it will create dust that can kill plants and grass if it’s used outside; fortunately, baking soda is nontoxic for humans.

How Are the Methods Employed? 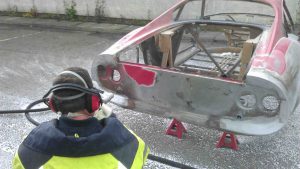 The first step in the process is for a car owner to figure out which parts of the vehicle body need to be blasted. According to eHow, if sandblasting is being employed and the part being blasted is an underbody part, a bleached and washed sand should be used. For visible surface parts, such as door panels, 36-grit silica sand should be utilized. If possible, parts of the car not being blasted should be removed and kept in isolation. These include panel strips, door handles, taillights and other parts that are not undergoing the refinishing process. Contrary to popular belief, taping over parts is not a good enough solution because the particles may erode the tape or get underneath it. If possible, the parts being blasted should themselves be isolated, and a tarp should be used underneath to catch the particles and dust.

Dustless Blasting claims that dustless sandblasting is faster and easier than soda blasting. On the other hand, as far as cleanup, soda particles can typically be washed away whereas sand and dustless sand particles can be recycled and need much more cleanup time. According to Jalopy Journal, in many cases, the sand or soda can stay in joints and cracks of the car body long after the work has been performed. For this reason, extra attention should be paid to holes, nooks and crannies in the areas being worked on.

Which Method Works Best When It Comes to Body Work and Painting a Vehicle?

Soda blasting and sandblasting create dust, which can get inside the vehicle and into body parts. Baking soda is technically an alkaline chemical, and the particles are so small that they get into the pores of the metal. Soda blasting companies often leave a protective film on a car’s surface to prevent flash rusting, and this can have a negative impact on epoxying or prime coating a car prior to painting because the epoxy or primer peels away from the surface. Therefore, to remove this film, grinding must be used, or the film can be neutralized with warm, soapy water and a scuff pad. Some people perform the latter process at a car wash. Others recommend adding vinegar to the mix and using Scotch Brite afterward. A good number of people have reported negative experiences trying to paint soda-blasted cars, mostly because the film was not removed or neutralized prior to painting. Car owners should be careful as having to re-do a paint job can cost thousands of dollars. People who did not perform this step have had to paint their cars multiple times at great cost. Often, they blame the soda blasting process when, in fact, they did not prep their vehicle enough prior to painting.

Which Method Works Best on Rust, Paint, Oil and Grease, and Which Method Is the Least Costly? 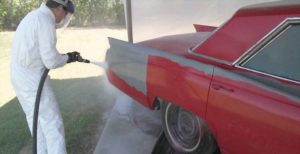 How Long After Blasting Can One Wait Before Starting on Body Work or Painting a Vehicle?

A common question is how much time can elapse between the blasting of a vehicle and its preparation for painting. The answer is that it depends on the method of blasting being employed. If sandblasting or dustless sandblasting is utilized, the bodywork or painting of the vehicle can be performed as soon as the surface is clean. However, according to website FlashRust.org, in a humid environment, flash rusting can happen within minutes to hours of blasting. The climate and geographical location where the work is being performed can greatly affect humidity levels as can indoor environments where moisture is prevalent. Any rust must be cleaned immediately prior to beginning bodywork or painting. In humid environments, the sooner bodywork or painting is begun, the better. With soda blasting, the surface is usually protected by a film applied to remove the soda from the metal when the process is finished. Because of this, the owner can wait as long as they want to begin the work; they just have to remember to either remove or neutralize the film before applying epoxy or primer.

There are multiple methods to removing paint, rust or grease from the body of a vehicle, but no one method is superior. Car owners should carefully consider the advantages and challenges for each type of blasting to select the best option for their vehicle.