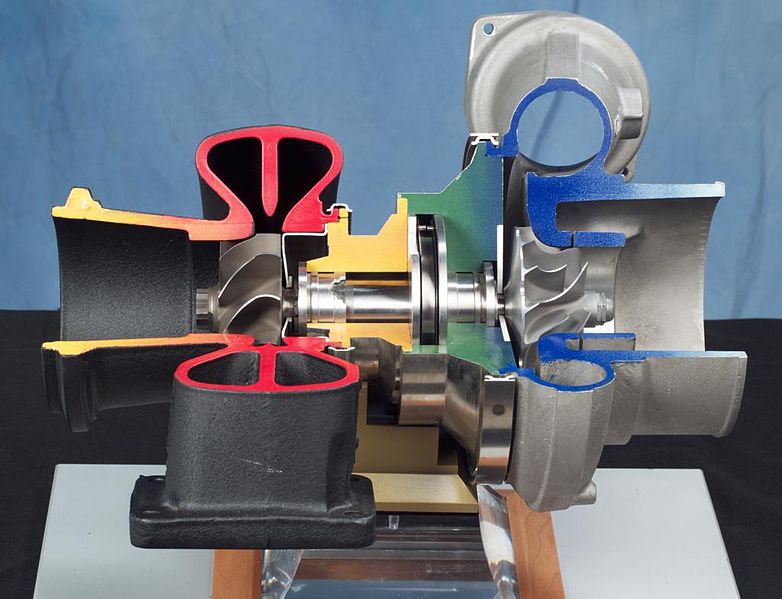 Ford’s 1.0L Ecoboost won the Engine of the Year award twice, BMW’s new turbo 1.5 liter is being praised by critics and VW recently announced that they were going to sell only turbocharged engines. Why is this happening? Can these new engines really substitute technology for displacement?

It’s All About Pumping In Air

During the intake stroke, the piston moves down, increasing the space in the cylinder. In a naturally aspirated engine, the gasses previously trapped in the combustion chamber spread out in this new space, creating a low pressure area. High pressure air from the outside the atmosphere rushes in until inside and outside pressures are equalized. However, creating that low pressure area uses energy, causing pumping losses.

A turbocharger is a turbine air pump powered by a second turbine spun by exiting exhaust gases. Since this energy is normally wasted, turbos get air into the cylinder with far less power loss than in a naturally aspirated engine. Turbos can also push in additional air, essentially letting an engine burn more air and fuel without increasing displacement. That means less friction from internal components, boosting efficiency.

Why are Turbos Reappearing Again?

Early turbocharged engines suffered from lag, causing reduced power until the turbo gets up to speed. Together with fuel delivery problems, it meant that turbochargers were only good for sports cars where pure performance is a priority. However, these issues have been solved with new technology: twin scroll turbochargers separate incoming exhaust pulses to reduce turbulence and lag. Direct injection allows fine control of fuel to prevent knocking, and variable valve timing helps performance at low RPM. The result is an engine that produces plenty of power at any speed, letting it cruise at low RPM for efficient highway cruising and deliver high end power for city driving.

Why are Automaker Switching to Turbos En Masse?

Ford estimates its Ecoboost engines get 20 percent better fuel economy and produce 15 percent fewer emissions than a naturally aspirated engine with a similar output. To put it another way, exchanging a naturally aspirated engine for a turbocharged engine in a 2014 model car would be enough for it to meet CAFE standards four years from now, yet the added cost is only around $1,000. Getting the same improvement from aerodynamics and lightweight materials would cost a lot more money.