Motor oil lubricates and thus protects your car’s engine parts, but it is subject to contamination from particles that form sludge. An engine oil flush can remove this gunk from 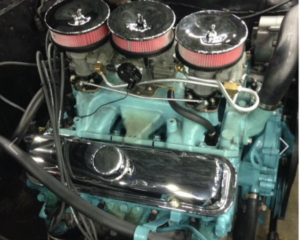 the engine and extend its life. While most auto manufacturers don’t recommend flushing new engines, there are circumstances that call for flushing an engine. When an engine is flushed, used oil is drained from the engine and oil pan, and engine oil flush products are run through the system to remove sludge and clean the internal surfaces. Just as performing an engine flush when it’s not needed can damage the engine, not performing one when it’s necessary also can be damaging.

When to Use Engine Oil Flush Products

Knowing your vehicle’s history can help determine whether your car’s performance will benefit from an engine flush. If you have owned the vehicle since it came off the showroom floor and you had the oil changed at recommended intervals, you probably don’t need to flush the engine. If you bought the vehicle used, however, and you don’t know the maintenance history, you may want to consider flushing the engine.

Sometimes, you can determine whether there’s a sludgy buildup simply by checking the oil, too. When oil changes are not performed regularly, deposits (from contaminants such as dust and tiny metal shavings from engine parts) build up in the oil and start turning into sludge. Once the deposits start to build up, they can reduce the flow of oil to the rest of the engine, where it’s needed to protect the internal engine components. The resulting excessive parts wear can result in major damage to the engine.

With more combustion soot and unburned fuel, diesel engines are even more susceptible to deposit buildup when the oil hasn’t been changed or when the correct oil isn’t used. In these instances, just changing the oil and filter and failing to do an engine flush also will result in the new oil turning dirty much quicker. 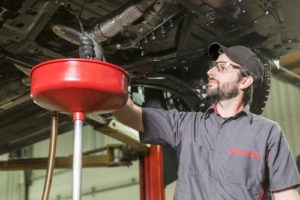 The Benefits of Engine Flush Products

If you have determined that it’s time for an engine oil flush or a diesel engine flush, count on Fast Flush Engine Flush or Diesel Engine Oil Flush to improve your engine’s efficiency and extend the life of your vehicle. (It’s important to know that a different formula is used for diesel engines.) Here’s a look at how an engine flush benefits performance:

Take Care of Your Engine

At Gold Eagle, we share your enthusiasm for all things related to vehicles. When maintenance requires the use of engine oil flush products, know that Fast Flush Engine Flush and Diesel Engine Oil Flush are designed to help extend the life of your vehicle. Check out more Gold Eagle products to help you preserve and protect the things you love.