The Dodge Challenger arrived in 1970. Along with its sister, the Plymouth Barracuda, it was intended to take on other muscle cars like the Pontiac Firebird and the Mercury Cougar. These were all bigger cars than the sports compact cars of their day – the Ford Mustang and Chevrolet Camaro. In contrast to the pony cars, the Challenger five-passenger coupe offered a large cabin with decent rear-passenger legroom.

The 1974 Dodge Challenger with the bigger V8 was a legitimate muscle car, although it really represented the end of the muscle car era. Production ceased in April 1974, and the Challenger would not re-appear until 1978, when a re-badged Mitsubishi Galant Lambda was marketed as the next Dodge Challenger. Edmunds acknowledges the 2011 Challenger’s status as a bonafide muscle car, but it also gives it credit for being a superb grand touring coupe as well. 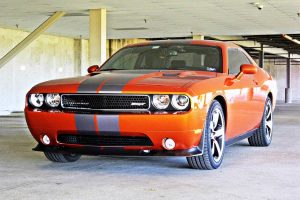 From Death Writer via Wikimedia Commons

In 2011, Dodge upgraded it Challenger engines to make them even more powerful. The Pentastar V6 in the modern base SE is very different from the V6s of four decades ago. In the 2011 Challenger, the V6 generates a very respectable 305 hp, which is up 55 hp from 2010. The SRT8 got a bigger engine for 2011 as well. The 6.4 L, 392 cu-in V8 engine led to a new designation for the top-of-the-line Challenger – the SRT8 392. This behemoth supplies a maximum 470 hp and 470 lb-ft of torque. Low-end torque is an impressive 90 lb-ft greater than that generated by the biggest Hemi in the 2010 lineup.

The modern Challenger rides on significantly larger wheels than its predecessor. Seventeen-inch rims are standard while 18-in and even 20-in wheels are available. In 1974, OEM wheels were either just 14 or 15 inches in size.

Of course, the 1974 design cannot compete with the technology featured in the modern Challenger. A quick look at the optional Connectivity Group illustrates the point. It includes Bluetooth and an iPod/USB interface and satellite radio; even the terminology was unknown to early ’70s car enthusiasts, much less the actual technology. The auto-dimming rearview mirror, automatic headlamps and heated front seats were not to be found on the 1974 version either. Garmin GPS navigation with a touchscreen interface is also a feature unknown to those driving in the earlier muscle car era. 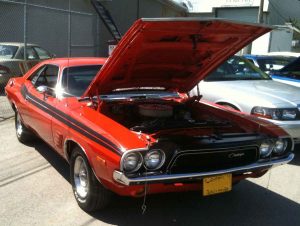 From Bull-Doser via Wikimedia Commons

Even with the larger 360 engine, the 1974 Challenger took over nine seconds to reach 60 mph from a standing start. Compare this to the high-end 2011 SRT8, capable of completing the 0-60 mph dash in about five seconds. Equipped with either a 426 Hemi or 440 six pack in the 1970-71 Challengers could compete, completing the 0-60 test in a little more than six seconds. However, those engines were no longer available in 1974.

Another way to compare the original to the modern challenger is on the basis of what it would cost to own one today. The best 1974 Challenger restorations beat the 2011 Challenger rather handily. Hagerty calculates the average price of a 1974 Challenger Concours-quality restoration at $37,500. By comparison, the top-of-the-line 2011 Challenger SRT8 392 is typically priced used in the $27-33,000 range. Challenger R/Ts often run in the low to mid 20s, while the base Challenger is often priced at well under $20,000. However, pristine SRT8s with under 5,000 miles on the odometer come close, at $34-$35,000.

Today, collectors covet the early ’70s Challengers, especially the 1970 and 1971 models with the most powerful engines. Some enthusiasts swap out the smaller V8s in the 1974 Challengers to replicate the performance of earlier versions. However, in a straight-up comparison between production Challengers from 1974 and 2011, the modern one wins hands down.