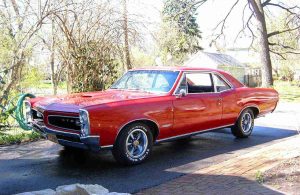 With nearly 100,000 units sold within a single year, the 1966 Pontiac GTO is by far one of the most popular muscle cars in history. The beautiful coupe’s iconic styling helped it to become an instant classic. Here are some facts about this storied automobile.

When purchasing a new 1966 Pontiac GTO, most models came equipped with the standard 389 engine. However, the legendary Tri-Power upgrade was definitely the most sought-after power source. Dual carburetors helped the V-8 engine to pump out an impressive 360 horsepower. However, the extremely rare XS Ram Air package raised the GTO’s output to 380 horsepower. When floored from a standstill, the powerful coupe could hit 60 mph in about six seconds. In regards to the GTO’s quarter-mile performance, the Tri-Power version could easily clock less than 15 seconds. This was a very impressive feat during this time period.

The 1966 Pontiac GTO’s eye-catching design certainly contributed to its popularity. Featuring mesh inserts, the car’s signature grille gave it a unique look that no other competitor could match. A new roofline gave the GTO an even sleeker appearance than before. You surely can’t forget about its muscular hood scoop. Meanwhile, a pair of fluted taillights adorned the rear fascia. On the inside, wood dash trim gave the cabin a very classy look. If desired, buyers could also opt for a center console with the car’s floor shifter.

What Separated the 1966 Pontiac GTO from the Pack?

While there were more potent muscle cars on the market, very few had more curb appeal than the 1966 GTO. The car’s long list paint colors and accessories gave it a big advantage over its rivals. This multi-talented muscle car had very few weaknesses. Drivers could have fun without compromising any comfort. Whether the driver was racing from one stoplight to the next or cruising along the highway, they were destined to have a smile on their face.

For good reason, the 1966 Pontiac GTO’s value continues to climb with each passing year. It was one of the greatest muscle car to be hit the market in 1966.

Get ready for spring by saving 15% on all products, all brands with promo code 15OFF0321.