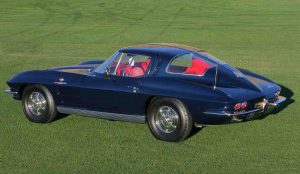 There is no car more iconic of American classic car culture than the Chevrolet Corvette. Ask anyone in the country with octane in their blood and lead in their foot and they’ll let you know. The ‘Vette reigns supreme. A beautiful blend of American muscle and sports car styling, the Corvette has been capturing the hearts of car guys since June of 1953, when the first roadster was rolled out. But the top of the heap, the most important Corvette model of all is arguably the 1963 Corvette Stingray.

In 1961, the head of GM’s design studio, Bill Mitchell, released a concept called the Mako Shark. It was brutally angled, muscularly flared and unlike anything on the road at the time. It is all the more surprising that GM took this innovative design, fused it with their Corvette SS racer and came up with a vehicle that would set the entire automotive industry on its head: the 1963 Corvette Sting Ray. The car was low, mean, powerful and beautiful. Exclusive to 1963 was the gorgeous fastback design with a central spine running through the rear windshield. Hence the name split window. Drivers could purchase a V8 engine with 250, 300, 340 or a then unheard of 360 horsepower. This combination of groundbreaking design, power and rarity has led to the 1963 Stingray being one of the most valuable collector cars on the market.

1963 Corvette Stingray Split Window is not for the Cost Conscious

Automotive insurance site Haggerty keeps a running tally of average prices for all manner of classics. Even the base L30 Stingray coupe holds an average value of $52,856, which is hardly chump change. If you are looking for a top-spec L84, that number rises to $149,754. However, the standard L84 is not the true top of the heap when it comes to 1963 split window coupes. For that title, look to the limited-run, track-focused Z06 models. These came with the top-spec, fuel-injected engine, heavy-duty suspension, aluminum knock-off wheels, more potent brakes and a limited-slip rear end. The rarest-of-the-rare “big tank” models came with a 36 gallon fiber glass tank for those long road races. A “small tank” model will run you on average $239,385. The “big tank” models are averaging an astonishing $376,695. So if you want the best Corvette money can buy, better start saving up those pennies or maybe take out a second mortgage.