By the end of the 60s, the Nova SS was one of the smallest muscle cars on the market, packing a big block engine into a compact chassis. However, it didn’t start out that way. The first Novas were built because Chevy was losing sales to Ford, and the first SS was little more than a trim package. Despite the lack of a V8, SS convertibles have become highly collectible.

The Failure of the Corvair and the Rise of the Nova

Chevy entered the new compact car market in 1960 with the Corvair, but its rear-mounted, air-cooled engine was a little too wild for most buyers. Its unpredictable handling, immortalized by Ralph Nader’s “Unsafe at Any Speed,” practically handed the market to Ford’s traditional front engine, rear-wheel drive Falcon. Chevrolet was forced to rush a more conventional vehicle into production, designing a new car from the ground up that hit showrooms just two years after the Corvair’s launch.

In 1962, GM released the Chevy II Nova. Despite the added complexity of a front engine layout, the Nova’s lightweight unibody frame resulted in only a modest weight gain over the Corvair. To save development time, Chevy altered their new straight 6, creating a 90 hp four cylinder that bowtie enthusiasts today known as the “Iron Duke” and a downsized six with 120 hp as the optional motor. Either engine soundly trounced the Falcon’s 85 hp straight 6, although the car hardly looked sporty. 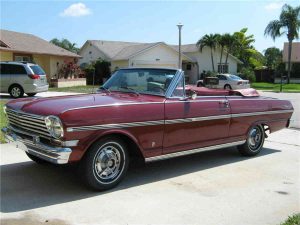 Enthusiasts started dropping V8s into these new compacts as soon as they hit the market, leading Ford and Chevy to introduce their own factory V8s. Ford was able to beat the V8 Nova to the market by a few months as a mid-year ’63 option, but Chevy was able to capitalize on their straight 6’s brief advantage by going ahead with their planned Super Sport option.

Although the SS badge is equated with serious performance today, the first Nova SS was little more than a trim package. Starting with a coupe or convertible body with the 400 sport trim, the SS option added emblems, an instrument package, wheel covers, side moldings, bucket seats and a floor shifter. For a short time that year, the Nova had the power and the looks of a proto-pony car.

The Only SS Convertible

The ’63 SS would be a mere footnote in the wake of the V8 models except for one minor change: Chevy dropped the convertible body in ’64. That means the 1963 is the only year GM built a drop top Nova SS, and even then, it accounted for a small fraction of the 44,000 SS models produced that year. This has made these cars highly collectible despite their lack of performance.