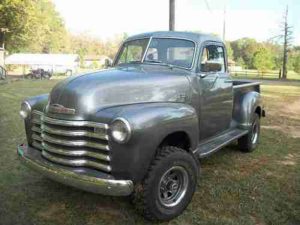 In our final installment this week for the Cool Rides Online February 2016 Ride of the Month, here is some background information on the 1953 Chevrolet 3100 4×4.

The 1953 Chevrolet 3100 pickup truck is part of the “Advance Design” series of Chevy trucks. This was Chevy’s first major truck redesign of the post-World War II era. Advance Design trucks replaced the AK series pickups. Advance Design pickups were sold from 1947 to 1955, during which time they were the top-selling trucks in the United States.

The 3100 is a half-ton, 116-inch wheelbase pickup truck originally powered by a 216 cubic-inch, 92 horsepower Chevrolet straight-six engine. The engine first appeared in 1937, and it was not phased out until 1963. The factory price of a Series 3100 pickup truck was approximately $1300, or about $11,000 in today’s dollars. It was possible to add a variety of options like leather seat trim, long running boards, a heavy-duty clutch and chrome radiator grille. For the 1953 model year, the “Chevrolet” emblems were removed from the hood, and the hood series designation emblems now read “3100.”

Converting a 1953 Chevy half-ton to a 4×4 is an attractive idea, in part because the wide flared fenders cry out for big rubber. For 4×4 conversions, owners have found vehicles with a similar wheelbase and then swapped out the newer 4×4 frame. For a complete frame swap, some enthusiasts turn to a 1973-87 Chevy or GMC 4×4. They are also popular because there are so many of them in salvage yards, making parts easier to locate. Other have used Suburbans, Broncos or Blazers for a 4×4 conversion. A body lift is typically needed to make the older cab fit the later model frame.

The other option is to convert the stock frame by installing drive axles and making a number of other modifications. However, working with the stock frame latter may involve more time and a need to locate some hard-to-find parts. Still, there are many ways to modify a Chevrolet 3100 pickup truck. For example, some enthusiasts have replaced the original engine with a 350 CID Chevy V8 with a Holley carburetor. The original three-speed manual may be upgraded to a modern three-speed automatic. An oversized aluminum radiator is sometimes employed to keep everything running cool.