In our final installment this week for the Cool Rides Online March 2016 Ride of the Month, here is some background information on the 1941 Willys 441. 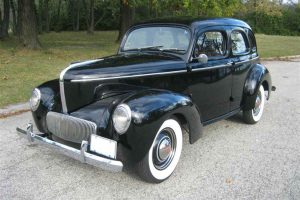 The hot rod era introduced several stylish and powerful vehicles in the 30s and 40s. Willys created some of the most iconic cars, and the Americar was a one-of-a-kind hot rod that single-handedly saved the Overland company from banrkuptcy. J.N. Willys gave Overland a check for $10,000 to produce 500 vehicles. After visiting the company, he discovered the company needed additional money, and he financed the company to allow it to stay afloat and complete its production line. The 1941-1942 models were the last vehicles produced until 1952.

The 1941 Willys Americar featured an SV I-4 134.2 cubic inch engine. It provided a moderate 63 horsepower, which offered enough power to perform admirably. It was smaller than some muscle cars. The wheelbase was only 104 inches, and it had a length of 170 inches. It weighed between 2,116 to 2,512 pounds. The 1941 Americar saw the production of 22,000 units. The 1942 version only manufactured 7,000 units. One of the biggest issues with rebuilding this particular vehicle is that the parts are now hard to find.

The vehicle’s interior features rounded gauges, chrome accents and an emphasis on simplicity and function. All the gauges you need are spread out conveniently on the dashboard. Step inside, and you’ll quickly understand how this vehicle was designed for racing. The cabin provides a certain ambience that takes you back in time. A properly restored version should have a body-matched dashboard, plush seating and a comfortably wrapped steering wheel. The interior is large and roomy and designed with comfort in mind.

The 1941 Willys Americar was the company’s last attempt at creating a civilian vehicle. The company then moved to full-time production of military vehicles. This is the big reason for why the company stopped manufacturing vehicles until 1952. It’s also notable for the powerful engine that really rocks the vehicle when it’s idling.

While the vehicle originally sold for just $700 in 1941, a properly maintained version of the vehicle will likely set you back $40,000 to $60,000 today. It’s a vehicle that has maintained its value well, and it’s certain to be a valued item in any serious collector’s garage. Celebrities like Reggie Jackson own a 1941 Willys. The main drawback is that original parts are hard to find and expensive.