The fully redesigned, full-sized 1941 Fords arrived against the backdrop of an expanding World War. The 194.3-inch-long Super Deluxe was wider and longer than its predecessors, and it was powered by a bigger engine. 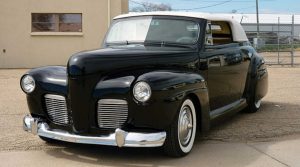 The 1941 Ford Super Deluxe came in a variety of configurations, including a two-door coupe, two-door convertible, a two-door sedan and a four-door-sedan. Ford also offered the Super Deluxe as a station wagon and a two-door pickup. The two-door convertible is distinctive in that it has no rear side windows. The following year, windows were added so rear-seat occupants could actually look outside. There were three different power mechanisms used to operate the convertible top: electric screw, hydraulic and vacuum.

The updated Ford designs of 1941 enjoyed a short-lived debut, as civilian production was suspended early in February, 1942. The Super Deluxe would not be produced for civilian purposes again until 1946, although Ford continue to build them as military staff cars. These were typically blacked-out vehicles that conserved chrome, a rationed war material.

Ford’s designers came up with a novel approach to front fender damage by dividing it into three parts. The idea was that a less expensive single piece could be replaced in the event of an untimely collision with a light pole or similar obstruction. However, a two-piece fender arrived mid-way through the model year.

For the first time since 1906, Ford went with a six-cylinder engine to power a vehicle. The 226 CID L-head straight-six generated a maximum of 90 horsepower, and it was used in the Special. The 221 CID flathead V8 engine powered the Super Deluxe. It was also rated at 90 horsepower. Ford’s larger 95-horsepower, 239 CID flathead V8 was reserved for the Mercury brand until 1946. The brakes on the Super Deluxe were among the best offered on any car of its era.

The 1941 Ford Super Deluxe employed a precursor to today’s smart keys for ignition. The so-called key operated a bolt lock that secured the steering column when the car was not in use. Use of the key also unlocked the ignition switch. The driver started the car by simply pushing a button on the dashboard. The electric starter was supplemented by a manual starting option to counter the possibility of a dead battery. The wheel-lug wrench served as the handle, and coupling pins were inserted through a hole in the grille to engage a socket on the front of the crankshaft. The wrench-turned-handle was simply twisted to start the engine.

The re-designed 1941 Ford full-sized cars ushered in a new era in American automotive design. The Super Deluxe was produced until the next generation of larger Fords arrived in 1949. At auction, a fully restored 1941 Ford Super Deluxe will often bring in $20,000 or more. Convertibles and station wagons often command the highest premiums.