Gold Eagle Co. has been honored as one of six boards for excellence in governance by Private Company Director magazine.

The awards honor private firms whose boards demonstrate best practices in structure and performance. Directors at these companies ensure that the interests of a variety of stakeholders — owners, employees and communities — are being optimally served.

Gold Eagle has been recognized for the efforts of our Advisory Board, an informal board with no binding regulatory role, but significant strategic function.

Here is the write up from Private Company Director magazine.

Gold Eagle Co. provides automotive, marine and outdoor-power equipment maintenance products under a variety of brands. Armin Hirsch founded the company in 1932. His eldest son, Bob, joined in 1957 and his younger son, Rich, joined in 1968. 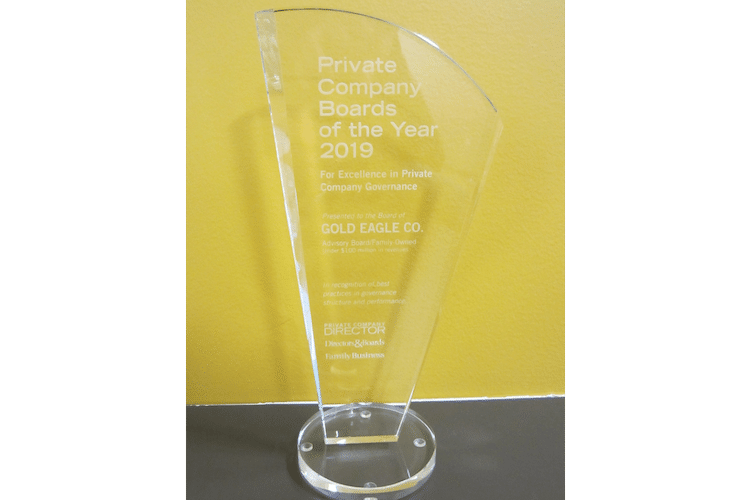 “We wanted feedback outside of ourselves — experts from other businesses — to provide different perspectives,” he says. The owners wanted input, not decision makers. “When they understood this, they went to an advisory board.”

Though they do not have a fiduciary duty, the Gold Eagle board does have influence.

For instance, Blackman says the Board was instrumental in assisting with and advising through the transition from second to third generation leadership a decade ago.  Gold Eagle has been fortunate to experience little familial conflict.  Still, both generations embrace the chance to run differences of opinion or strategies by the board members.  Blackman appreciates the support the board provides in every aspect of the company’s operation and future opportunities.